I feel like I have gotten so far behind on blogging that it is hard to want to catch up but sine I am awful at keeping a journal this is my way of remembering things so even if I don't get everything current at least most of the memories will be there.

Where do I start with my sweet little Bentley? I can't believe he has been in my life for 2 years! It has seriously flown by!

I love reading everyone's birth stories. They are all so unique and different. So I thought I would share mine if there is anyone who likes to read them like me. :)

This pregnancy went fairly smoothly for me. They kept a much closer eye on me since I had preeclampsia with Bentley. I didn't get preeclampsia again with this one, but I did develop a condition called gestational thrombocytopenia. Pretty much this means that while I am pregnant my platelets drop so they have to keep a really close eye on me because if they dropped too low I could bleed to death because my blood wouldn't be able to clot. So for about the last 8 weeks of pregnancy I was going into the dr every week and getting my blood drawn to keep an eye on it. Come to find out, I had this same condition with Bentley but it was masked by the preeclampsia so I will more than likely get it with every pregnancy and they said it will probably get worse with every pregnancy because of the antibodies I have built up.

At my 37 week appointment I was dilated to a 1 and was having fairly regular contractions. The next week still a 1.... The next week still a 1.... So I was kind of at a stand still but at my 39 week appointment I got the news that my platelets had taken a significant drop that week, and I was also measuring smaller than I should have been, so Dr Cox and I decided it was better to just induce me than to have me come in every day and get tested. Dr Cox decided we might as well do it that night, November 18. So I was sent to do a NST and then had to get home to pack and get everything ready.

I called the hospital at 5:30 and they were packed so they said they would call back when they had a bed open up. That was the longest wait of my life! They finally called at 10:30 and told us to come up. We got there and it took forever to get things moving. They had to run a bunch of blood tests on me before they could induce me and it seems like everything takes 10 times longer than it should at the hospital. They finally started the cytotek at 12:30.

Of course they tell you to get some rest and that never happens. I was so anxious and having contractions and I was hooked up to too many machines... Josh on the other had slept pretty soundly :P

At 4:30 they came to check me and I was dilated to a 3 but I was still really high and not effaced at all so they decided to give me one more cytotek. So far this induction went much smoother than when I had Bentley. I didn't really start getting painful contractions until about 5:30. That is when things really started rolling. At about 6 I asked for the epidural. Because of my condition they have to be really careful when placing  an epidural because I could bleed internally so they had to triple check that all my numbers were in the safe zone and then of course there was a shift change in the midst of all this and so the guy didn't come in to give me the epidural until 6:30.

At this point if I had known how dilated I was I would have just skipped the epidural but the nurse didn't check me since I had just been checked at 4:30 and she figured I was only probably at a 4 or 5. Come to find out, after he finally got the epidural placed at about 6:45 I was dilated to an 8. So the nurse went to go call my dr to let him know he should probably start heading over. While she was gone I started to get the urge to push. I was freaking out at this point because my body was pushing whether I wanted it to or not and there was no nurse or dr in the room. I was seriously panicking and screaming for a dr to get in my room. I guess the nurse was in the hall panicking as well because she did not want to deliver this baby and she was frantically searching for any dr she could find in the hospital.

She finally found a resident and he got there just in time. My water didn't break until right before I started pushing. About 4 pushes later and he was out! It is crazy to me how much that pushing instinct takes over. Your whole body somehow knows exactly what to do and I get it done. I could never be one to push for hours on end. Gage was born at 7:04 am on November 19, 2014. Dr Cox ran into the room with dripping wet hair just as Gage was coming out. By the end of it all I had about 4 doctors (they all were paged to my room when the nurse was freaking out and they all got there when it was too late) and 6 nurses in my room so it was pretty chaotic. Of course it takes about 15 minutes for your epidural to start kicking in and even longer for it to be completely in effect so I felt everything. And then after he was born I was nice and numb which was awful.

So for me it went super fast considering I didn't really start getting painful contractions until 5:30 and then having him at 7:04. Next time I am just skipping the epidural because it was not even worth it. My labors just go way too fast from the time I start into active labor.

We decided to name him Gage Wheatley Hall. Wheatley is actually Josh's middle name and his mom's maiden name so in a way we were naming him after Josh. He weighed 7lbs even and was 20.5 in long. He is perfect and we love him so much! 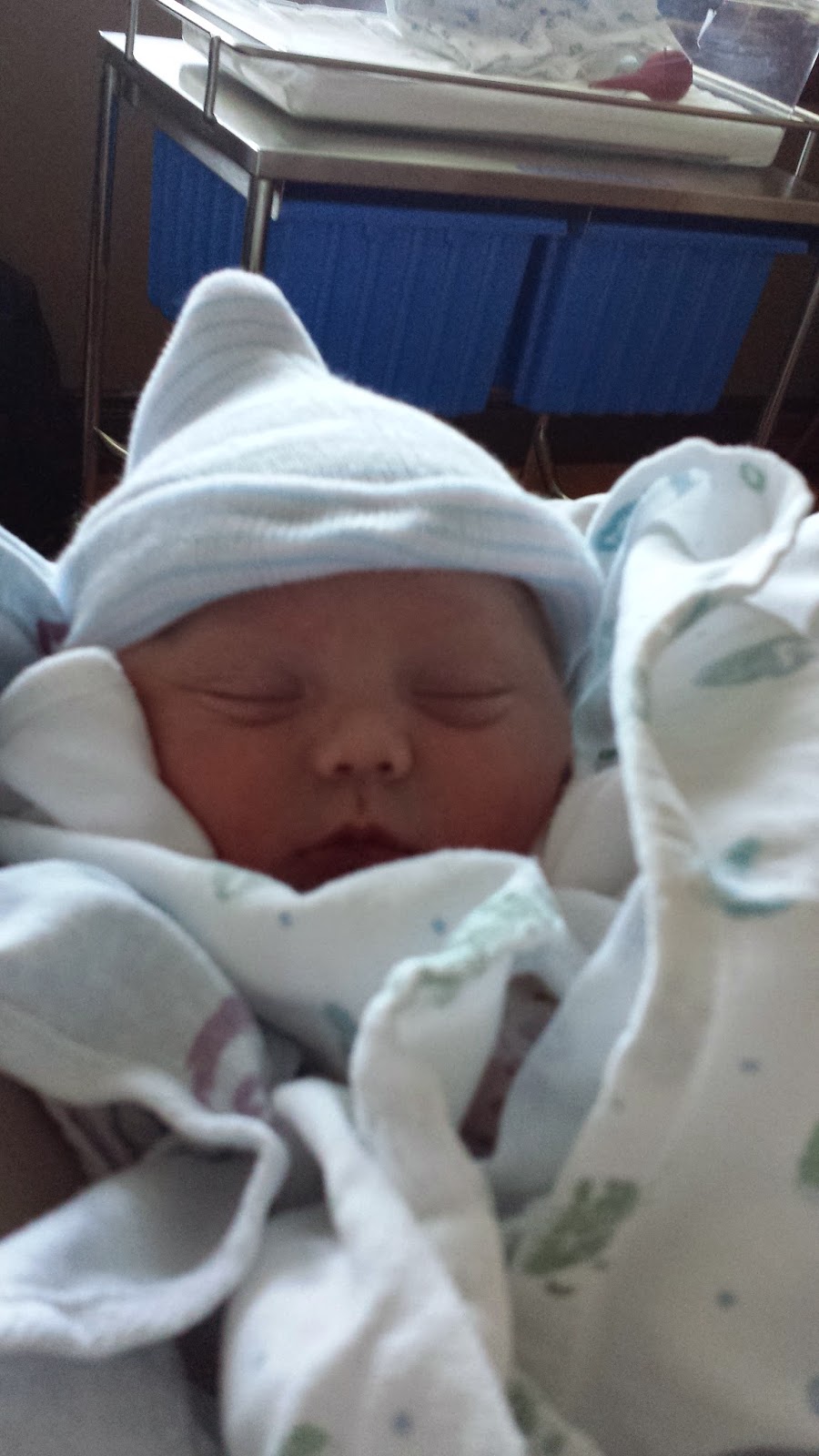 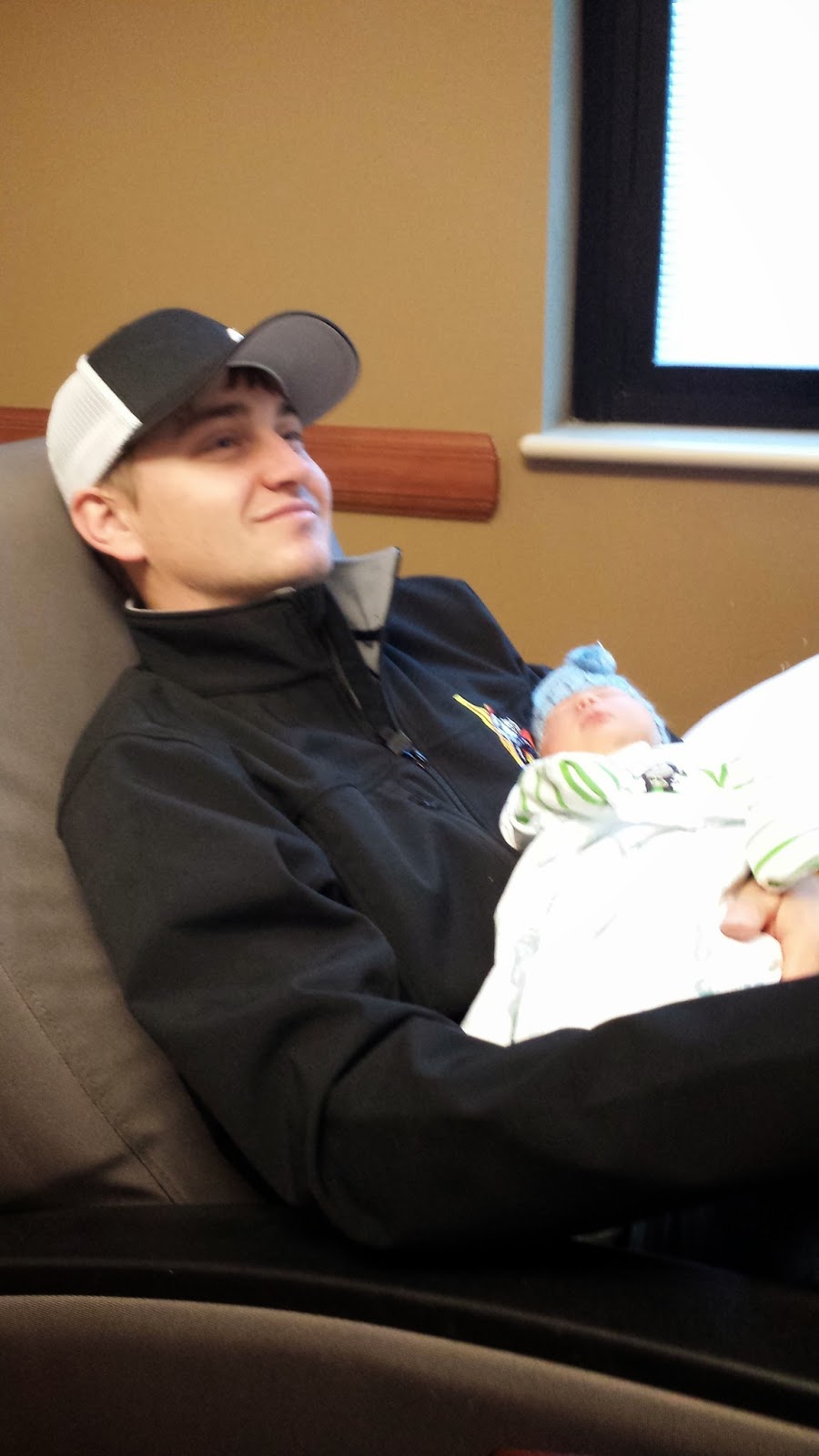 I have kind of been neglecting my blog mostly because I know I have a lot of catching up to do. So these next couple posts might be kind of long but they will be mostly for my record keeping purposes. I will probably devote a whole other post just to Bentley :)

Here is the condensed version :)


September:
I decided to become a presenter for Younique makeup and I am totally loving it! Currently I have 34 people on my team and I have advanced 3 levels!
October:
I know this was a long time ago.... but this is when Josh decided he was done with his painting company. He was not spending hardly any time with family. It wasn't that his company wasn't successful because he was super busy but he was so busy that it was consuming all his time. He kept trying to find good workers to take the burden off of himself but we were not successful. So he got a job at Lowes in the paint department and that got us by for a while.

November:
We went and spent thanksgiving with Erica in Payette and Bentley loved spending time with his cousins. We always love going up and visiting Erica and her family.

January:
We decided to start working on our house so we could put it on the market.

February:
Talked to the realator.

March:
Listed our house. 3 days later we got a full offer and accepted it. We needed to be out by the end of the month.

April:
Moved out of our house and moved into our new apartment in Chubbuck.
Bentley turned 1.
Josh got a job offer at Sherwin Williams he couldn't refuse so he quit his job at Lowes and started working for them.
The Saturday after we moved into our new apartment I found out that I was pregnant! We are really excited to be welcoming this new addition into our family in November. We find out in July if we are having a boy or girl. We both would love a girl so that we have one of each but we would really be happy with either.

May:
My last month of substitute teaching.
I started rehearsals for Anthems of America.
Took a trip to South Jordan to see two of my best friends that I haven't seen for a long time!

June:
Started watching a sweet little 2 month old Dax.
My grandpa turned 80 and we had a surprise birthday party for him.
My sister got married!

July
Took Bentley to Hogle Zoo and he was in seventh heaven looking at the elephants.
We found out we are having another little boy! We are so excited for Bentley to have a play mate.
Josh's last month with Sherwin Williams.

August
Josh started working as a lead tech at Idaho Fire and Flood.
Josh and I celebrated our 5 year wedding anniversary.
Went to our annual Mendenhall reunion. Boy nature sure is not baby proof.... but it was fun!
We put an offer in on a house and plan to close in September!

September
After only working at Idaho Fire and Flood for a month Josh got a promotion, which was huge, and he is now the assistant project manager. We are seeing great things in our future with this company and are so happy he is working there.
Started a long term sub job for the band teacher at Irving Middle school who is on maternity leave.
Bought another house! I will post pictures later.

Wow crazy amount of changes in our life in one year but I woulndn't change it for anything! And the next couple months are only going to bring more changes as this new little one comes into our family but it sure is a great life to live!
Posted by Unknown at 6:40 PM No comments:

A lot has happened in the last two months! 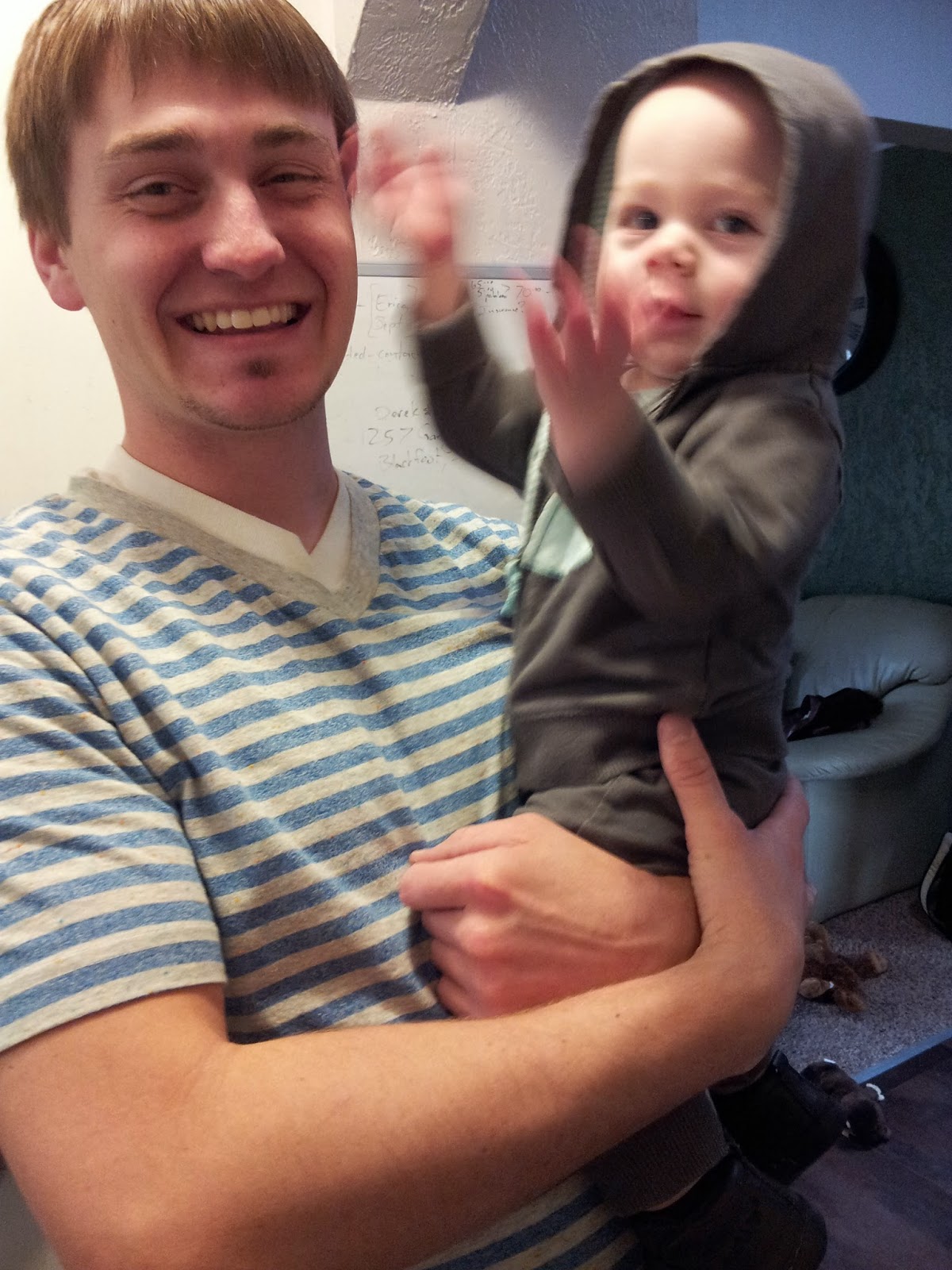 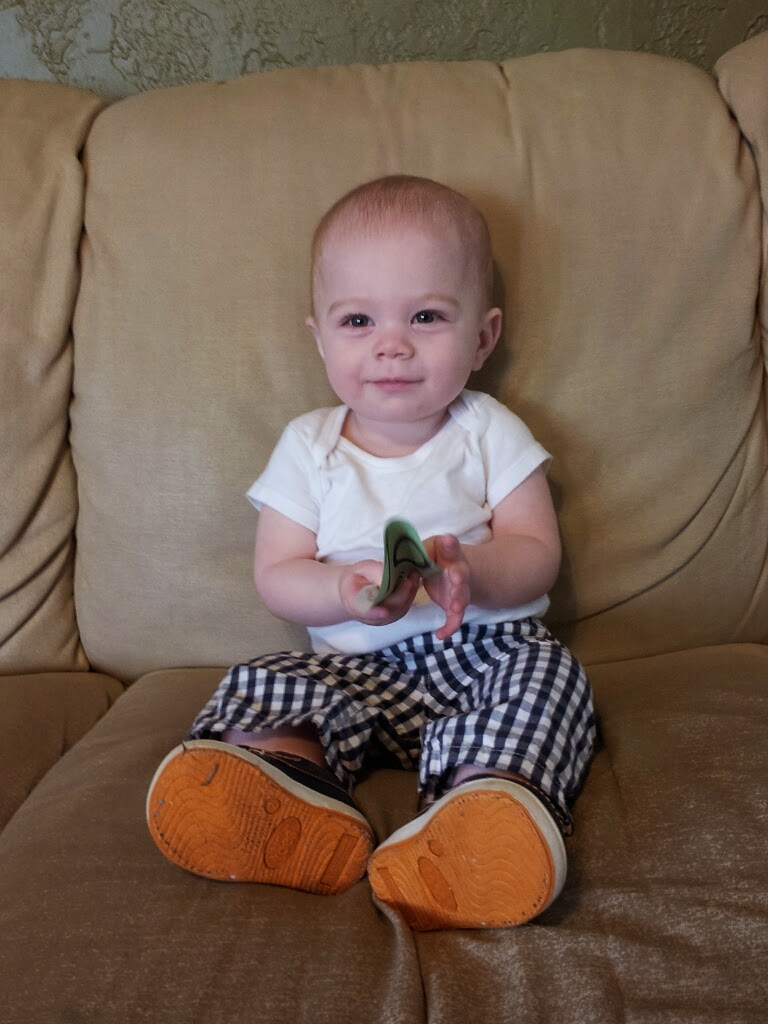 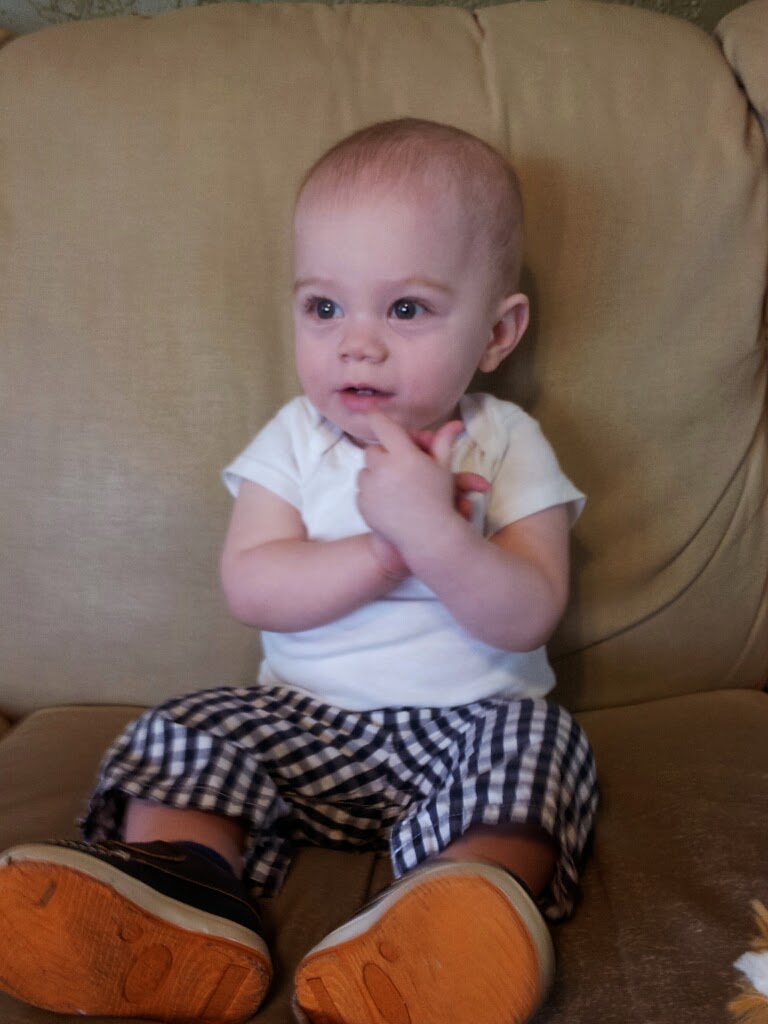 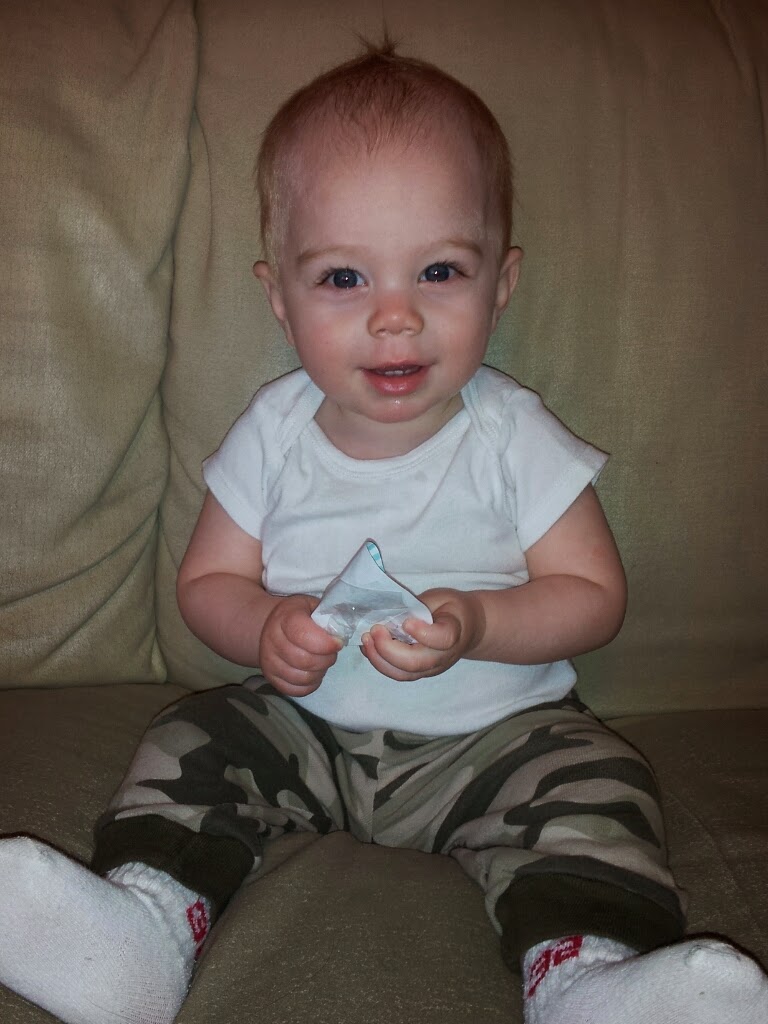 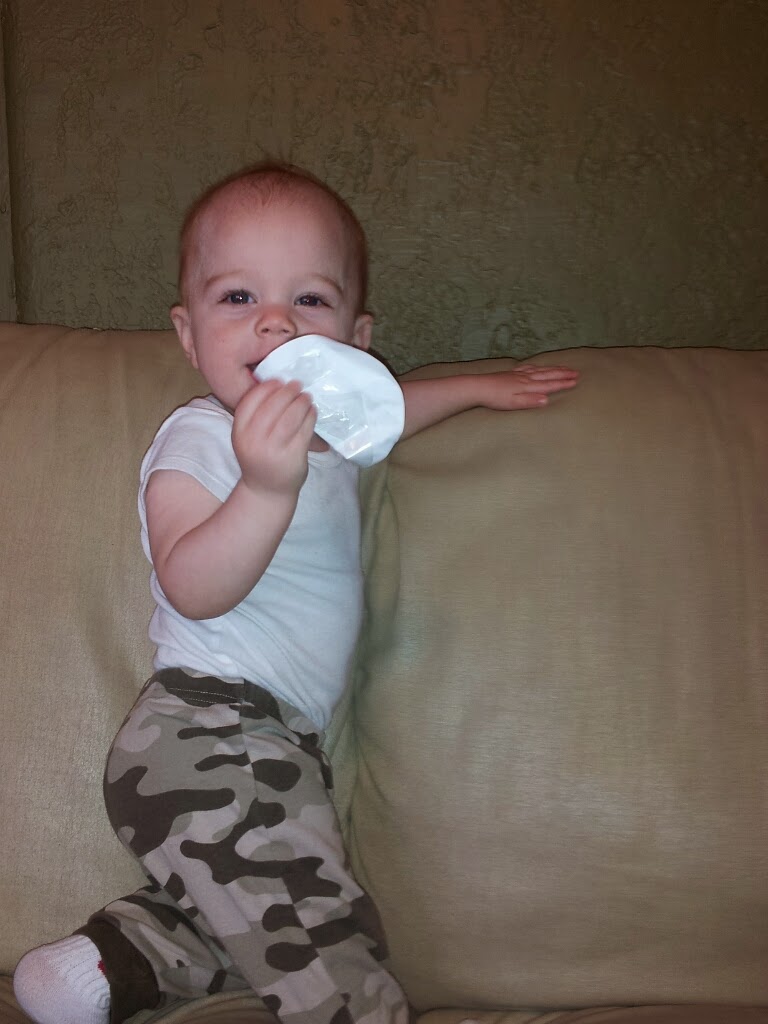 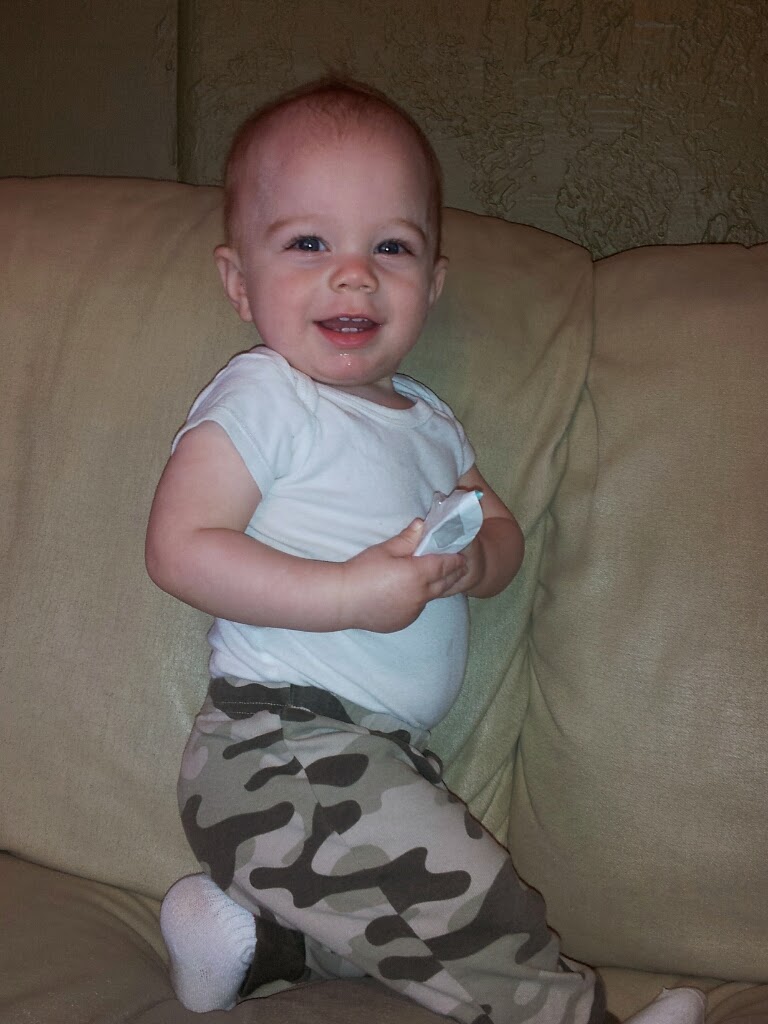 Posted by Unknown at 9:13 PM No comments:

9 months in 9 months out! I can't believe how quickly time flies! I love my little munchkin and he surprises me everyday with the new things he is learning.

And now sorry but there will be a picture overload. I just can't stop taking pictures of my cute little man! 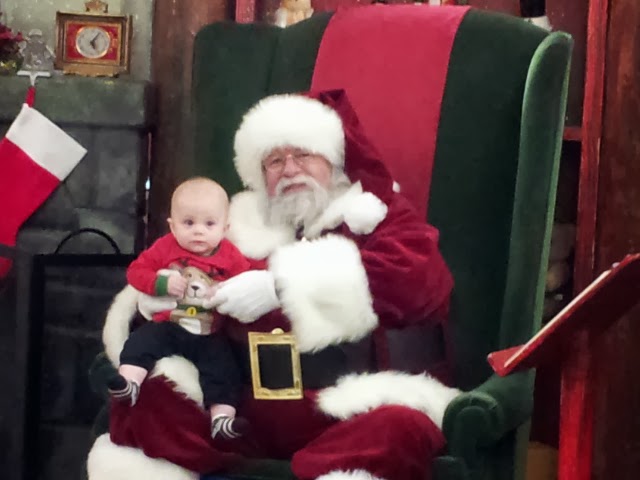 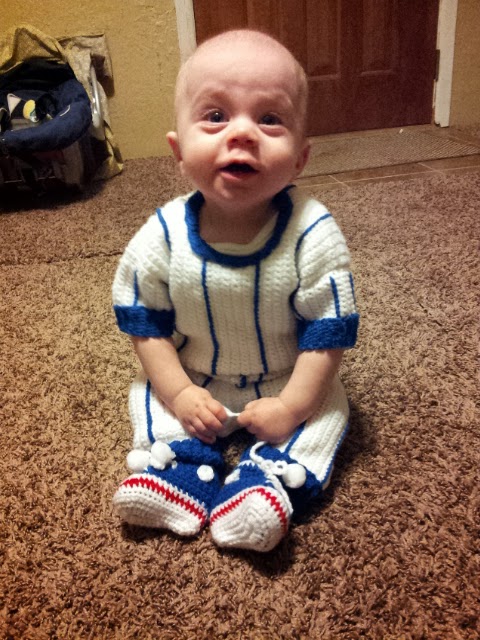 His face cracks me up! This is a crocheted outfit from my grandpa that he gave me when he first found out we were having a boy. 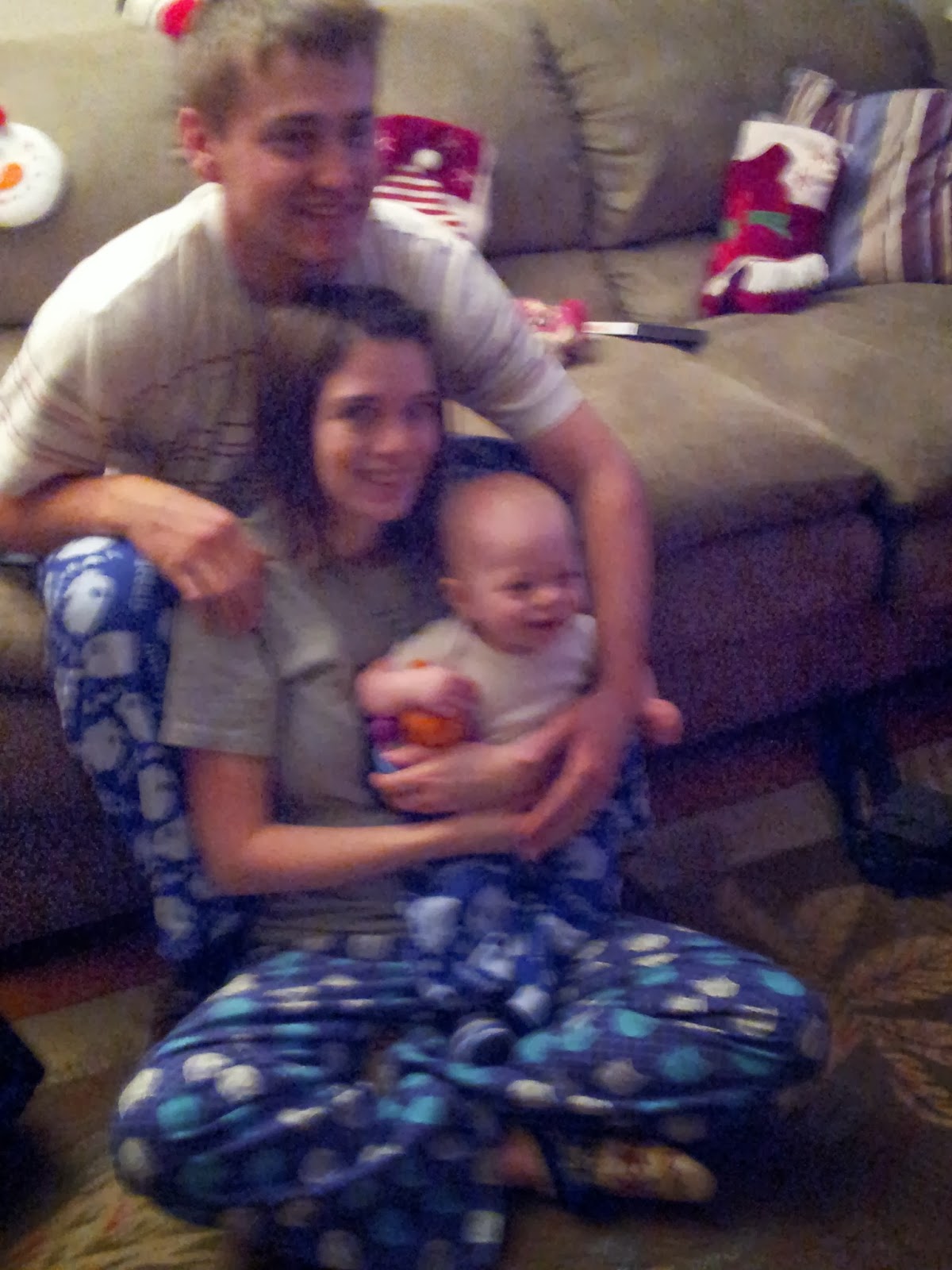 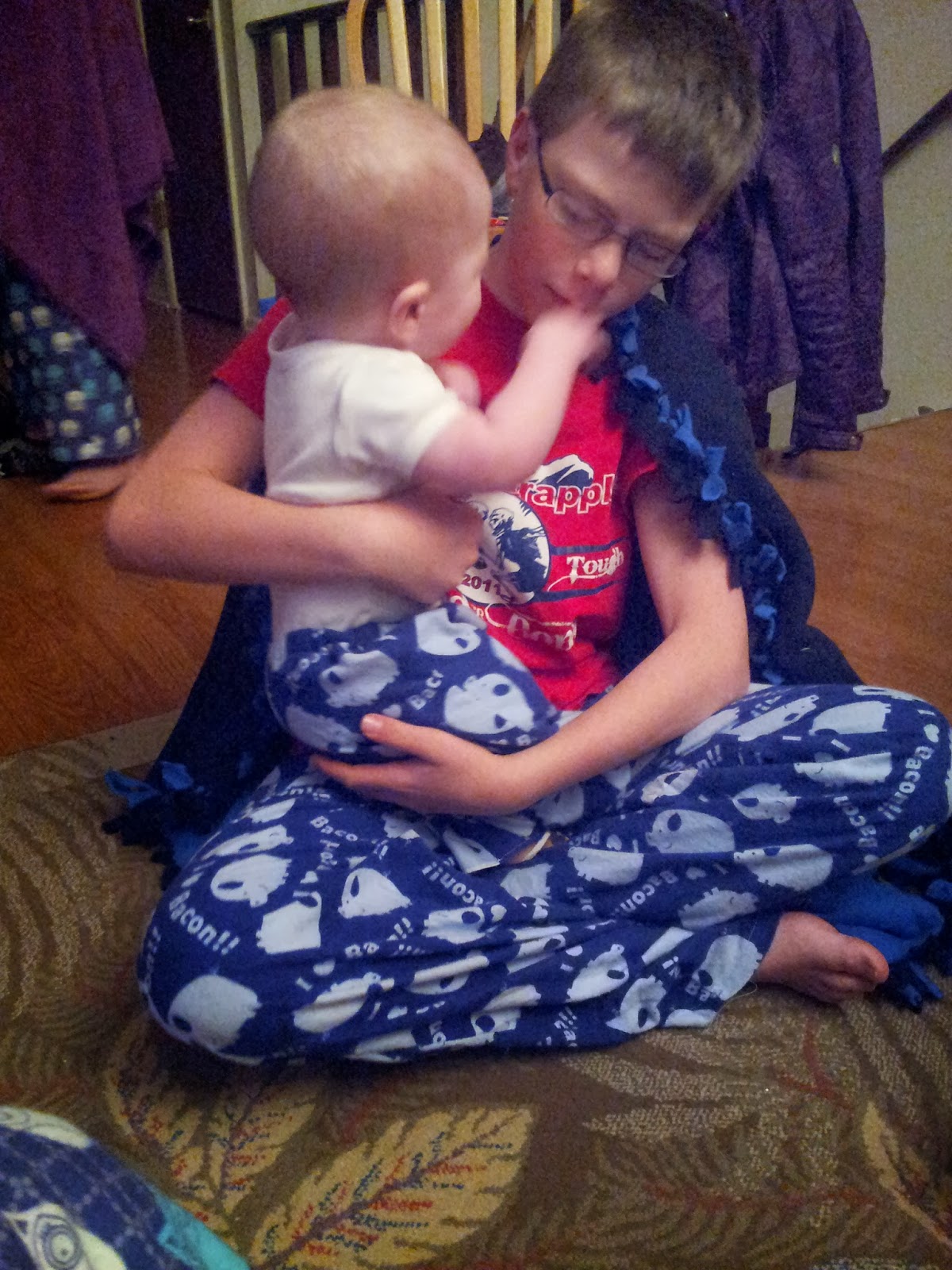 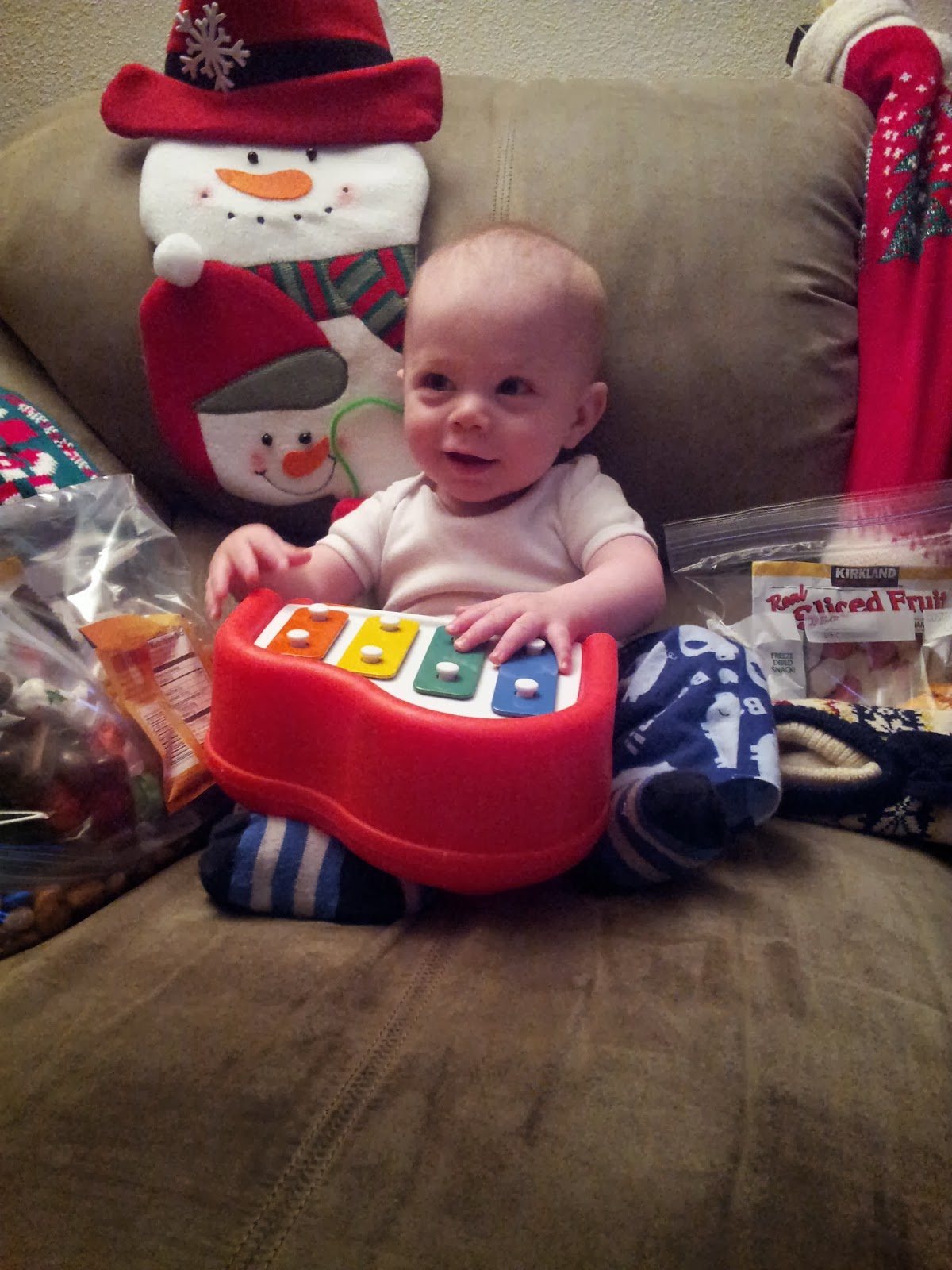 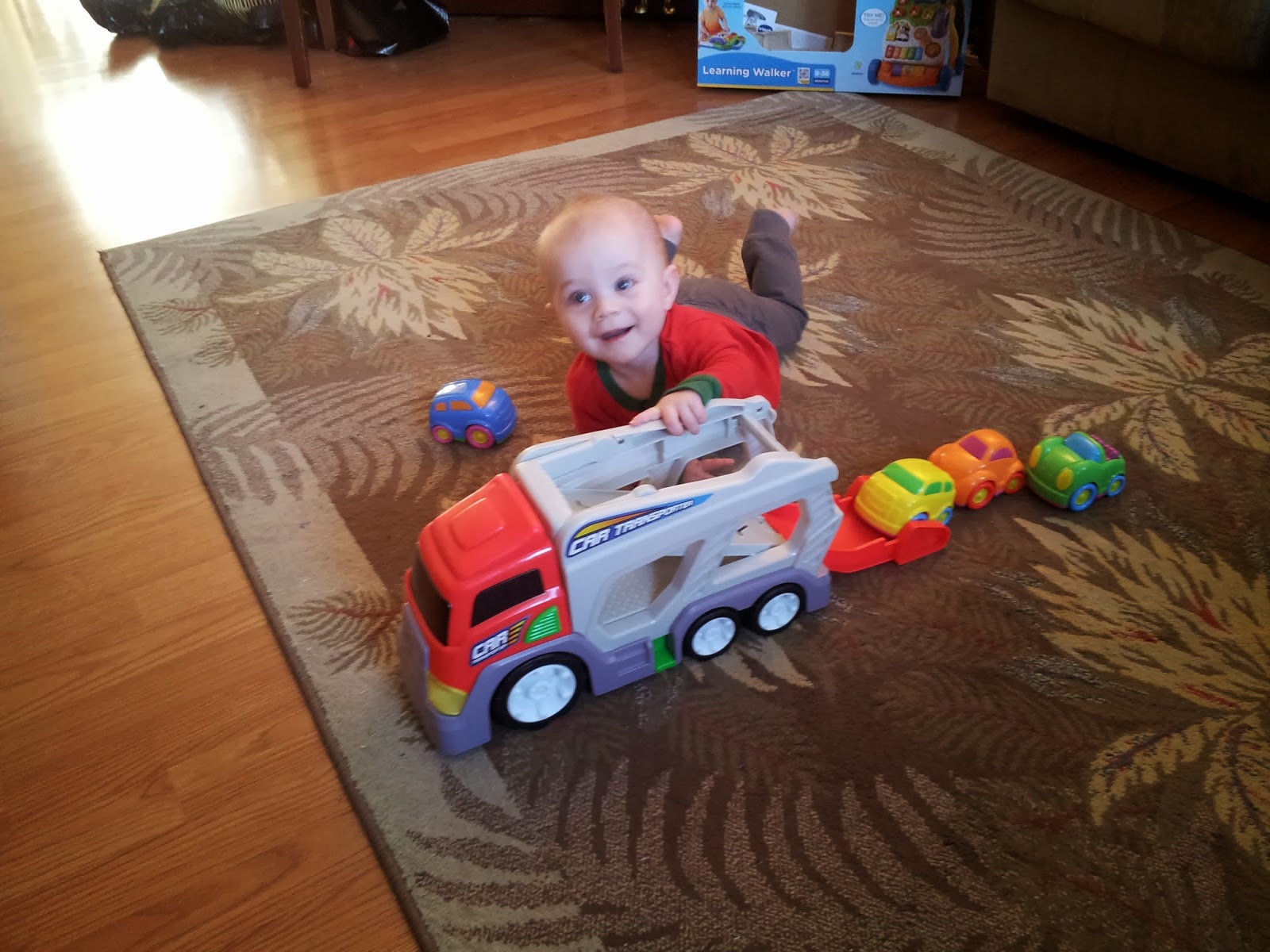 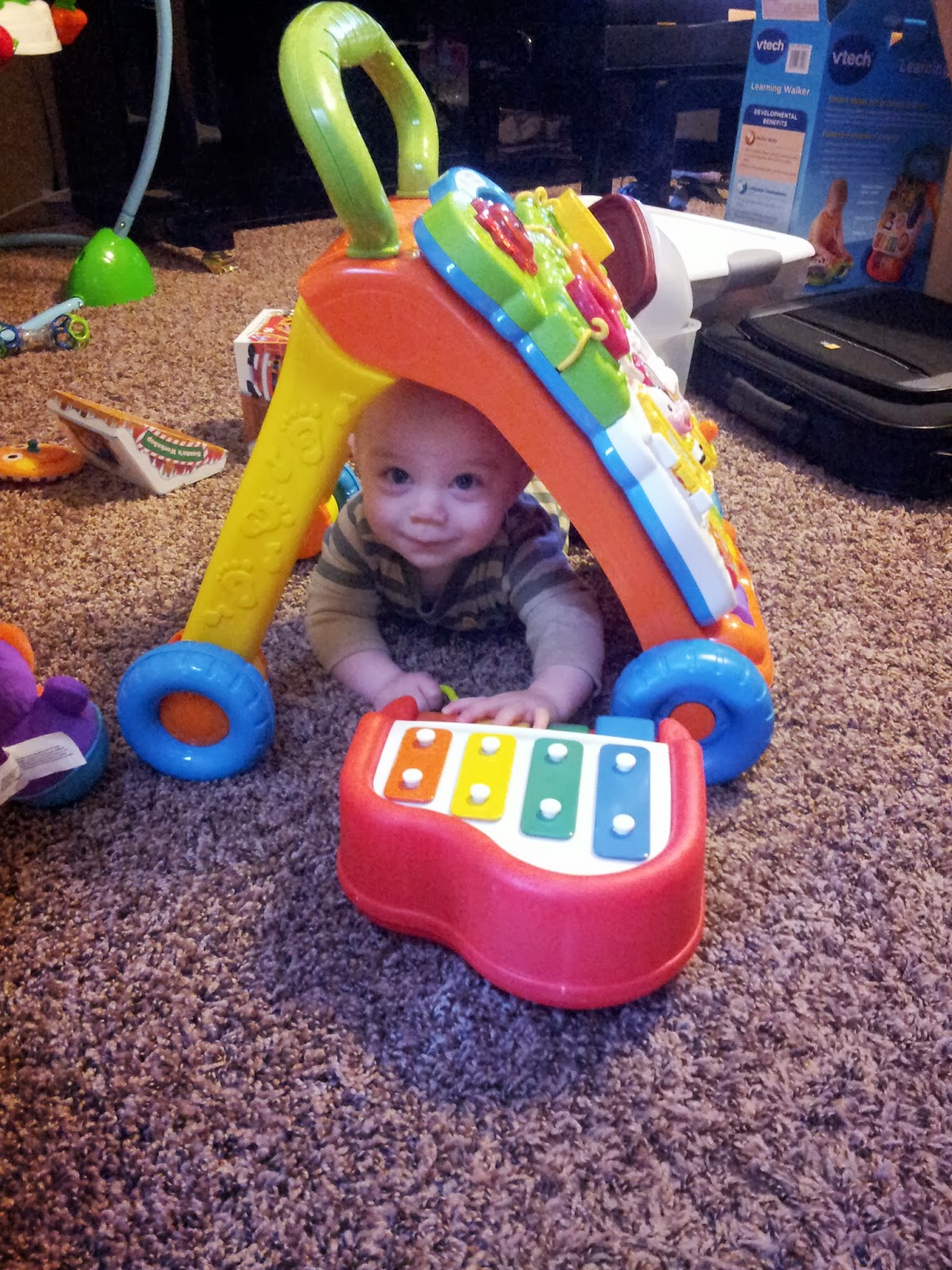 This cheesy grin makes me laugh. He was eating a pear and every time I told him to smile he made this face at me. So cute! 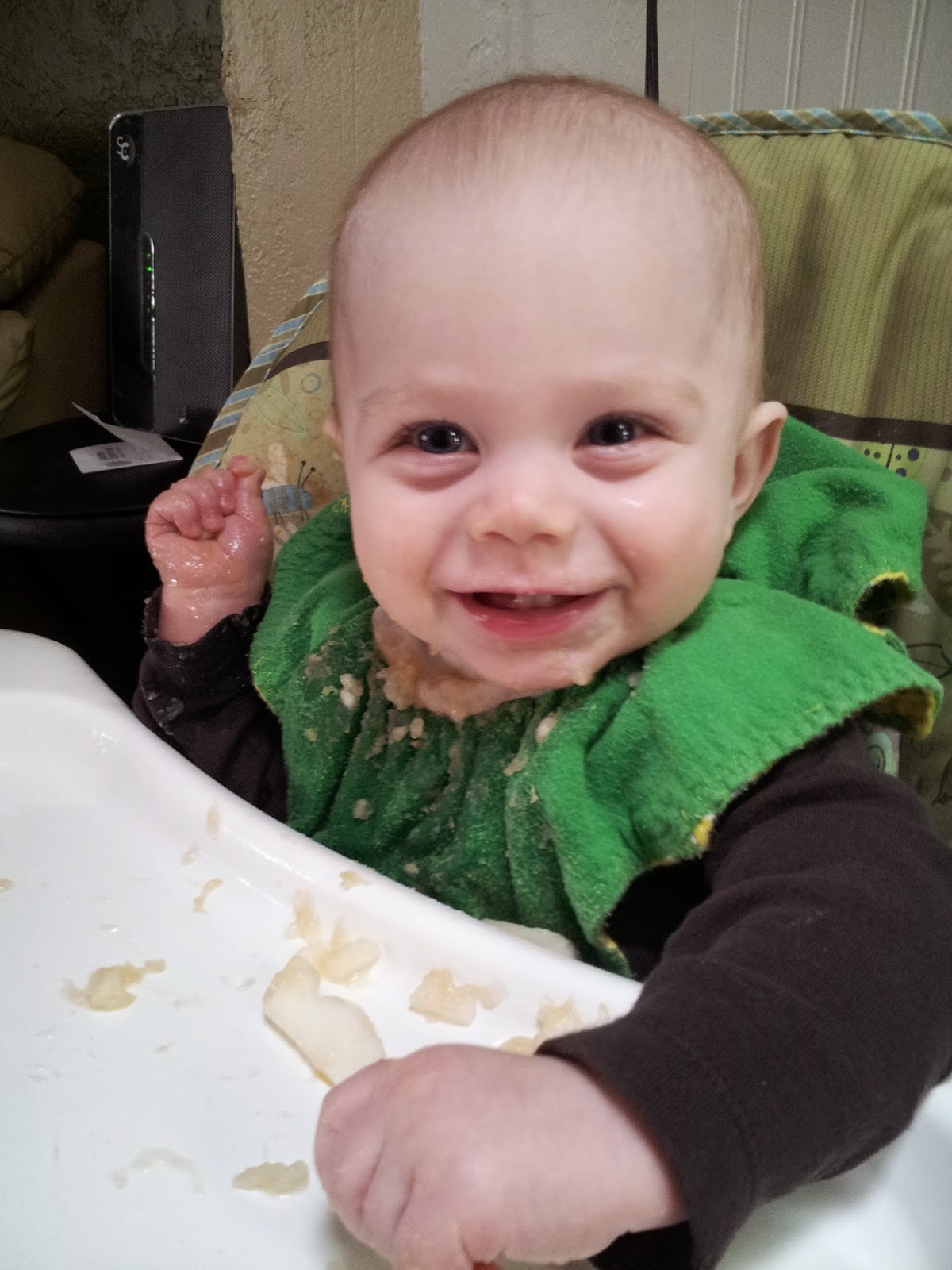 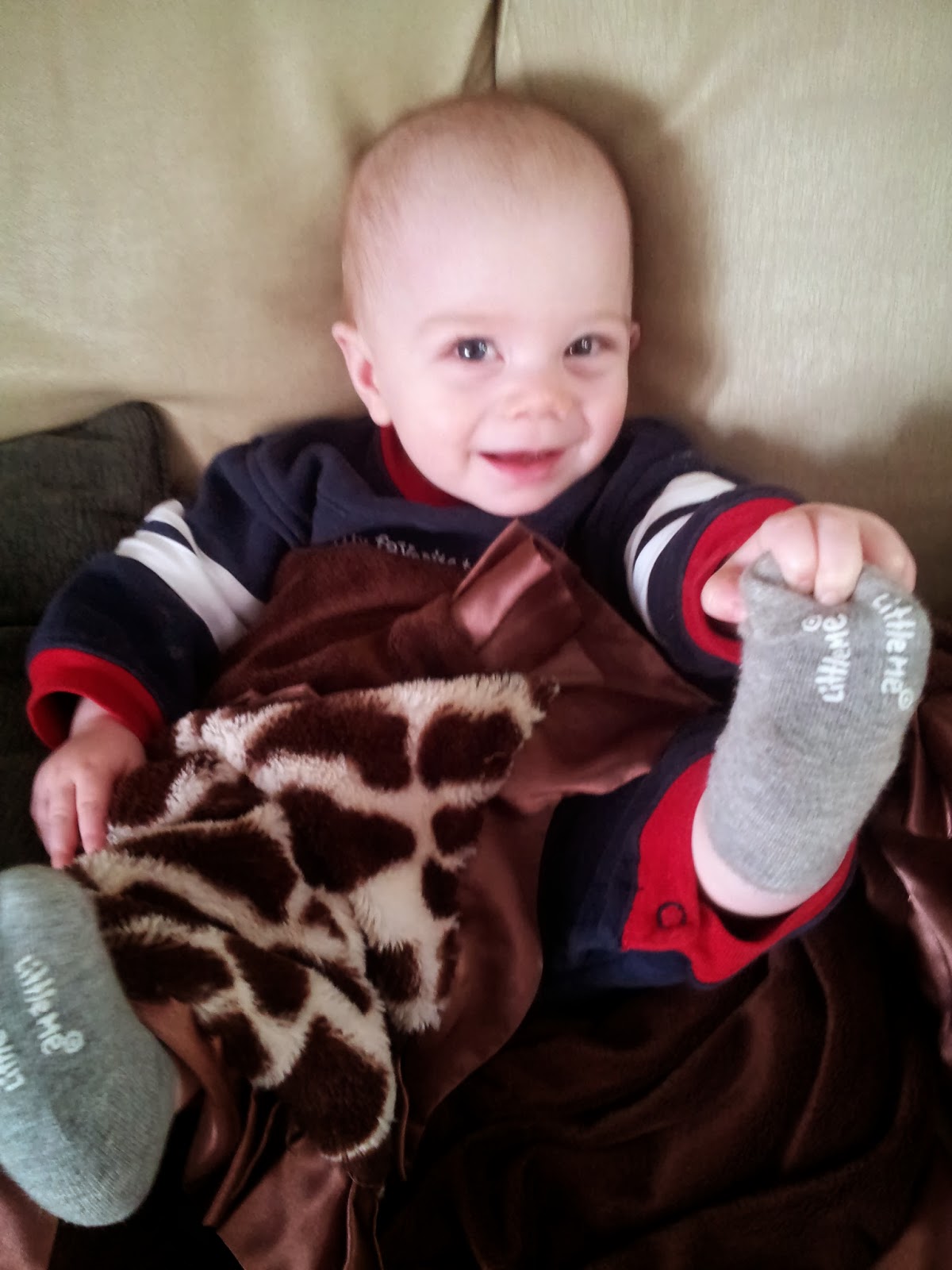 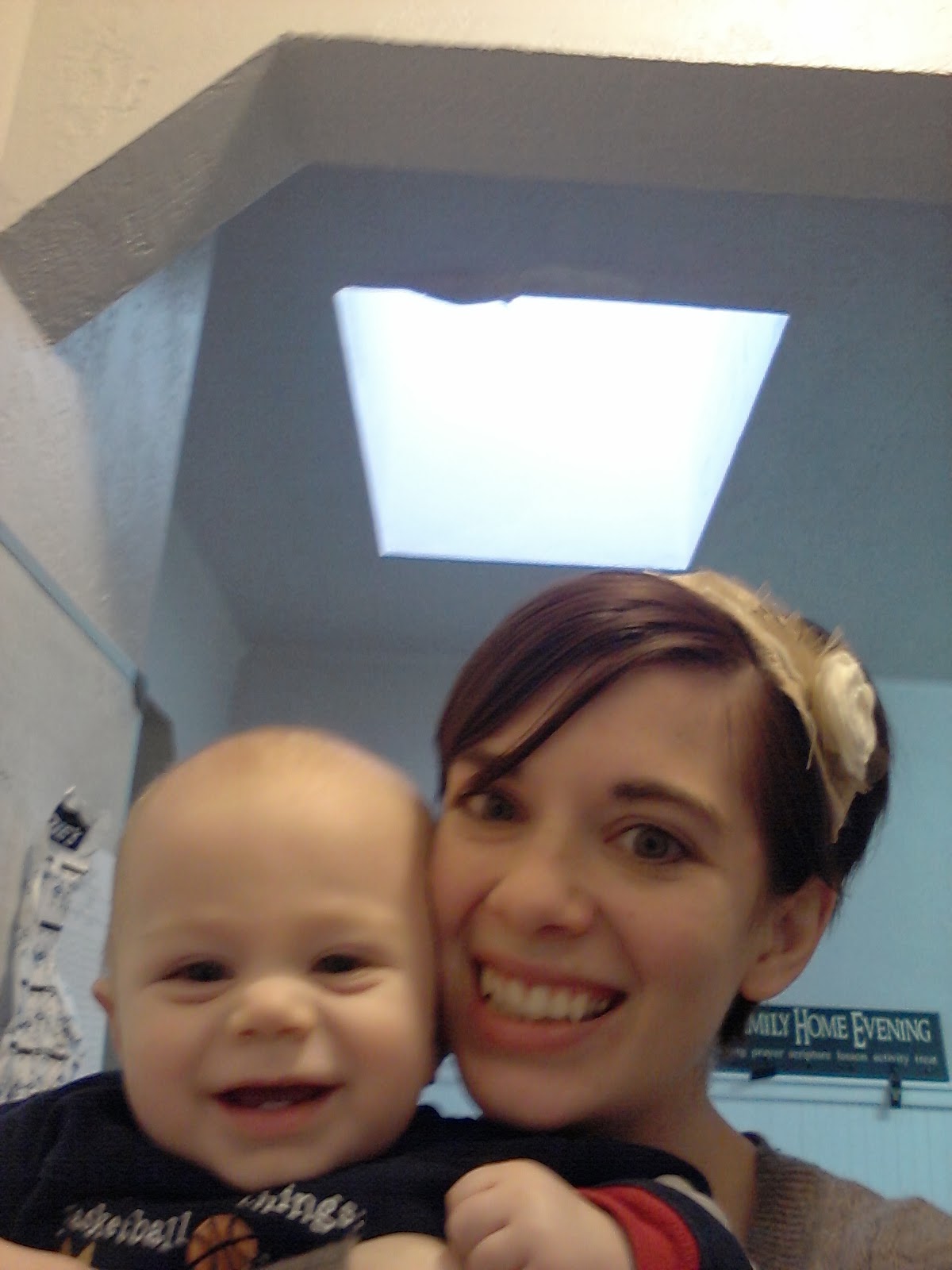 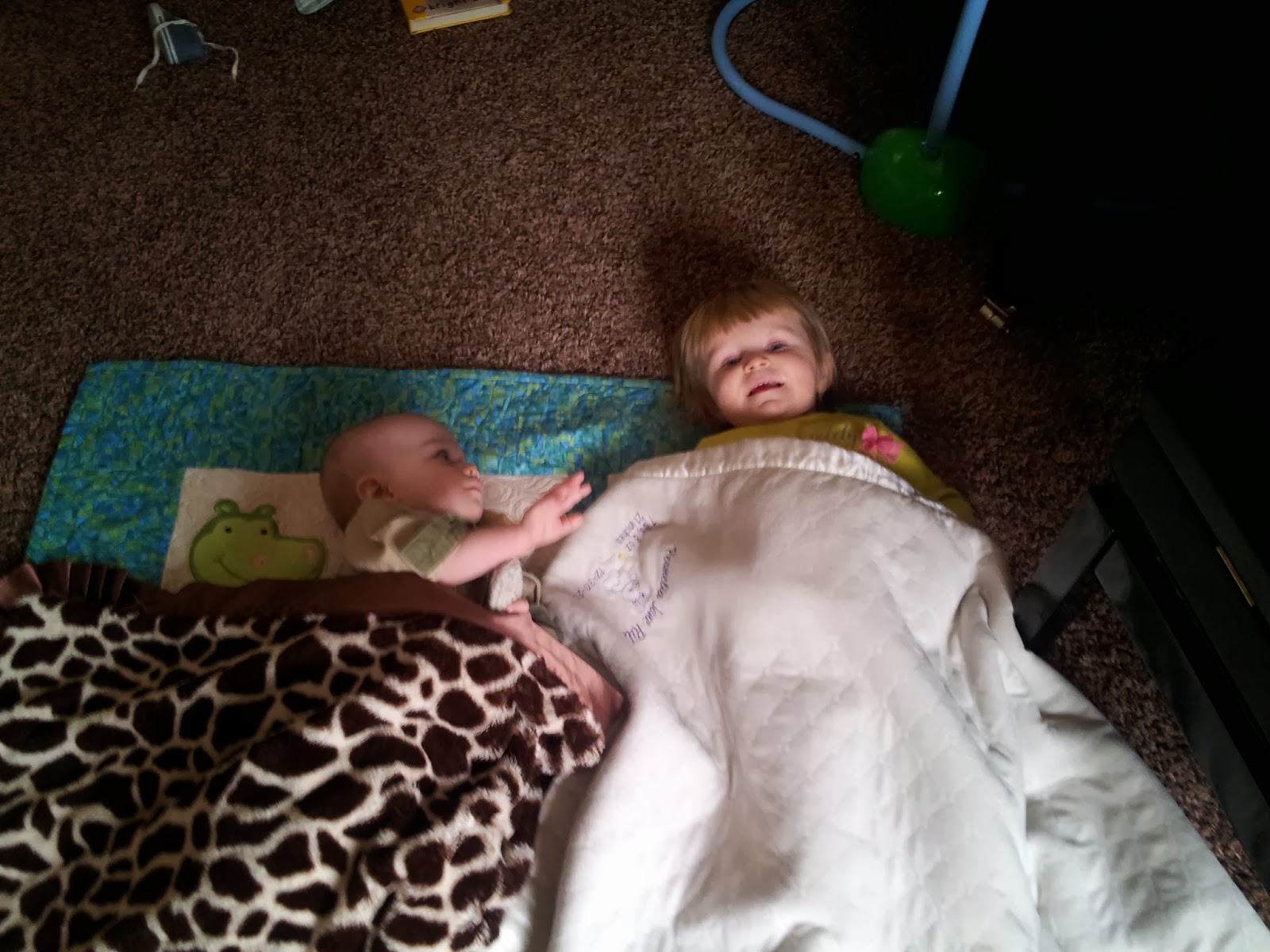 He WOULD NOT smile for his 9 month pictures! Little stinker. He was not happy I was making him sit still to take pictures. So this is as good as it gets. 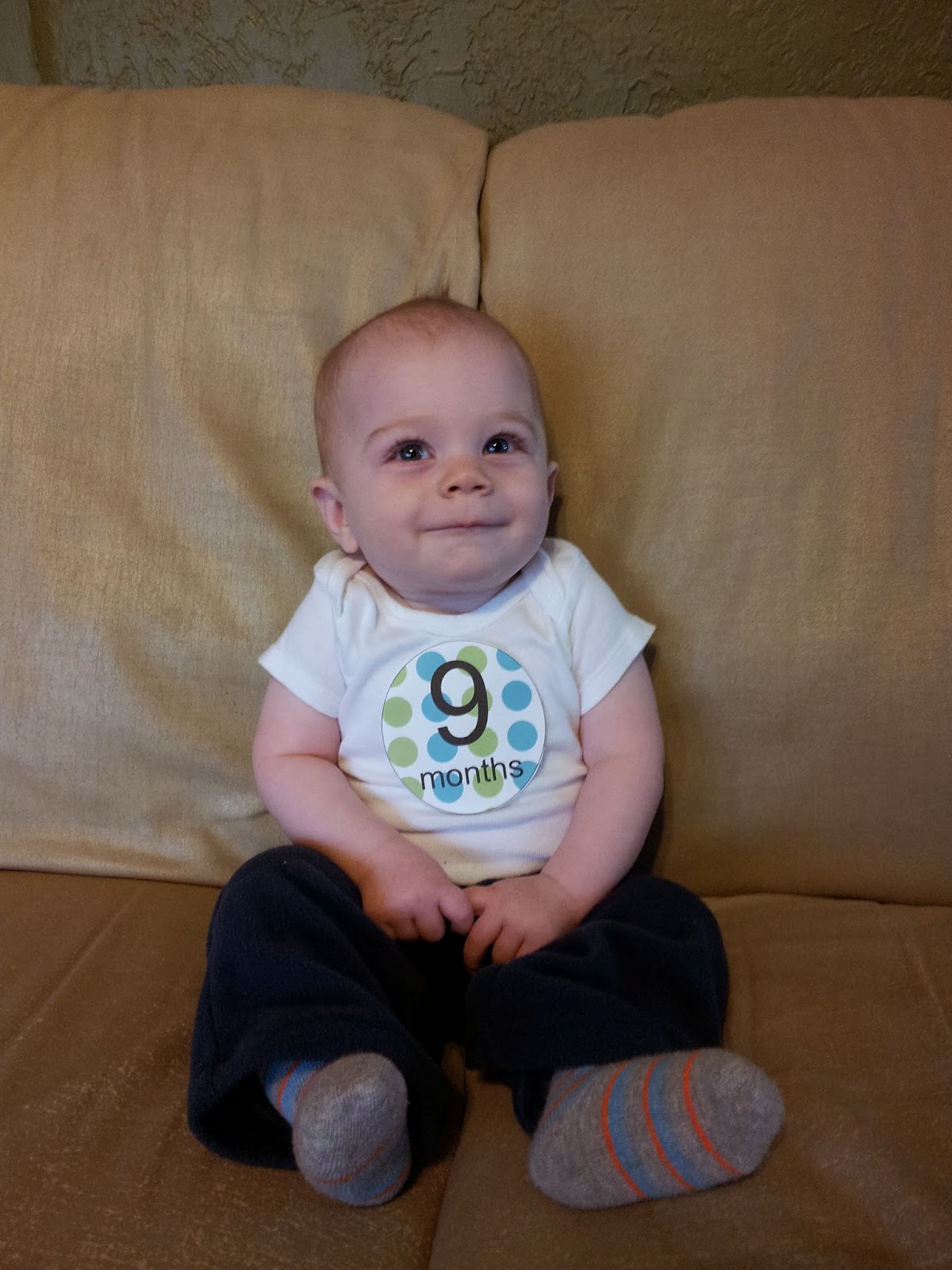 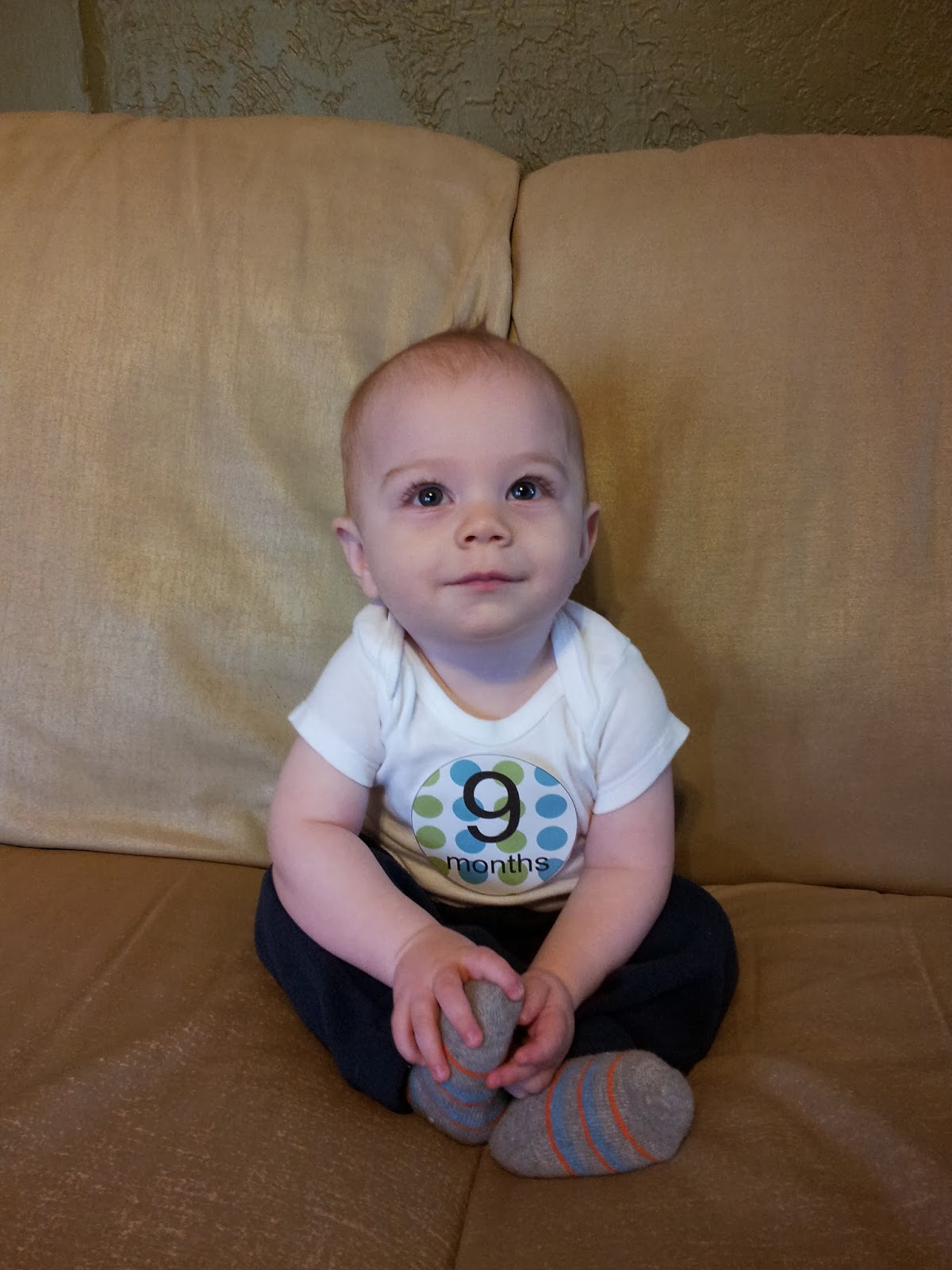 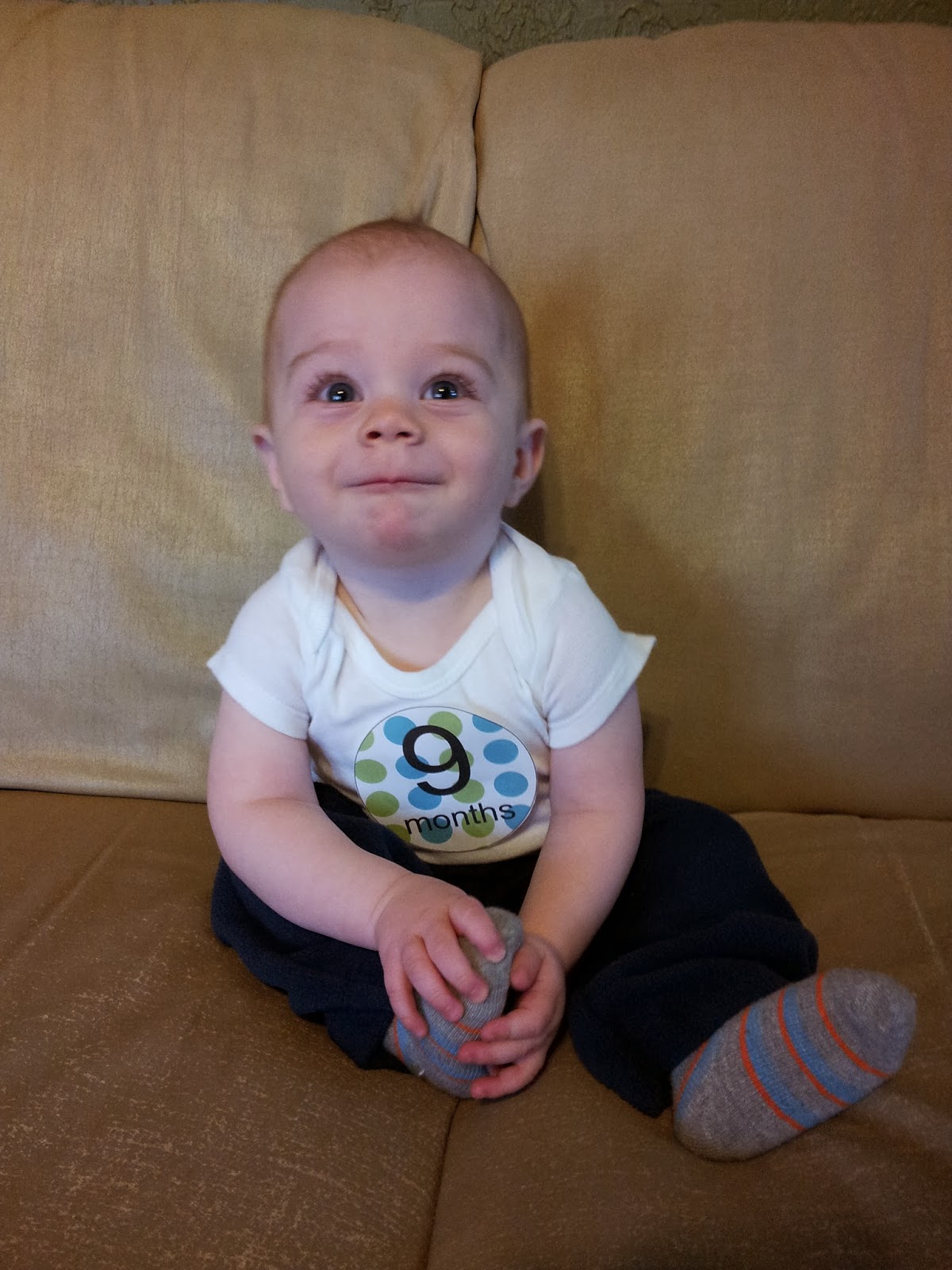